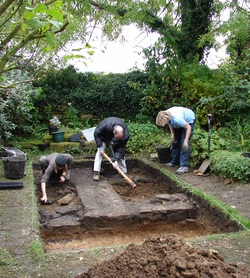 2008 season trench.
In the Autumn of 2008, the newly formed Bolsterstone Archaeology and Heritage Group landed with its feet running, with its first ever activity being the excavation of the village Smithy, demolished in 1958. At the time, the demolition of the Smithy had been a sore blow to the villagers, many of whom regarded the old building as being a hallmark of its identity, despite the fact that it had not been a working Smithy for more than 10 years at the time. Why should that have been? For the local kids, the old Smithy had been an adventure playground, and documentary research indicates that it had been a focal point in the village when in use, serving not just as a Smithy, but also as a part time dental surgery!

Clearly, its significance for the local community extended beyond being merely a place to shoe horses, although it had certainly served that purpose admirably. By excavating and recording the surviving features, and careful study of the finds, BAHG was able to return to the village a part of its past that locals, some of whom can still remember the old place, had thought lost forever. Initial findings indicate that the establishement was much older than previously thought, with its most dynamic period of activity being the 18th century. Several phases of building and rebuilding spanning at least 200 years prior to the 20th century, but especially during the 18th century, are testament to this activity and to the longevity of the site. Some findings indicate that it might even be older, and go some considerable way to filling the gap in the history of the village between the essentially 19th century character of the village as it now is, and the much earlier structures revealed by excavation in the village field, probably dating to the Late Medieval period.